A 'Palace of Winds' Without a Foundation

ow many of you love watching period dramas? Imagine how it would feel if you lived in those eras. Living in magnificent palaces whose praises are sung for generations to come, women and men celebrate art, culture, and life wearing the most elegant clothes. Everyone dreams about living that life like you are in a Sanjay Leela Bhansali movie. We have such monumental places that you can surely capture & experience yourself, living that life, even today.

Suppose you go and study some of these historical monuments which are carefully preserved and now are turned into tourist places. One of those places is 'Hawa Mahal’, the Royal City Palace of Jaipur. This place will leave you in awe. The name itself suggests that it is a palace of winds, so it's no wonder that it is the most photographed monument in the historical pink city.

The palace was built by Maharaja Sawai Pratap Singh, the ruler of Kachhwaha Rajput. This is a fusion of Islamic, Mughal, and Rajput architectural styles. Fascinating right? It was constructed in 1799 as an extension to Royal City Palace and is a dazzling phenomenon in pink sandstone that rises to an astonishing five storey structure. It was built so that royal women back then could watch the whole Jaipur city and its people. It used to be a quiet getaway for the royal families.

A bay window of the poet's mind A poet in his poem about the Hawa Mahal has described it as-
A bay window of the poet's mind,
the standing vision of joyous poetry.

Honestly, when you visit the palace, you can watch the glorious view from 953 windows which reflect a myriad of colors on the inside when sunlight passes through them. The structure looks like a honeycomb; you won't find any stairs inside as ramps were avoided to not compromise the architecture of the building.

The scarlet and orange hues of the sunset and sunrise blend well with the red and pink sandstone, creating a splendid picture. When you stand near those grand arches, you will feel like Royalty standing amidst such grandeur, looking over the celebrations of the festivals in the city. 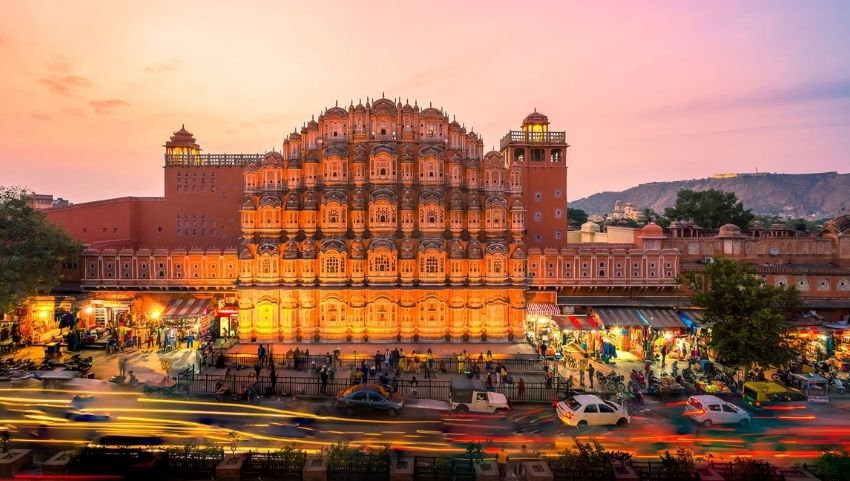 Yes, many people aren't aware that this palace of winds is the tallest building in the world without any foundation. So, you will know all about its intricate design and delicate but very firm structure when you visit the place. It's more profound when you will see it with your own eyes.

The five-storeyed structure, which was built to resemble the crown of Krishna, is very simple from the inside. As you wander around looking at ceremonial relics and royal paintings, embracing the spirituality of the temples inside, the place fills your heart with immense happiness. It surely will wake your curiosity about the ancient era of kingdoms!

Admin
December 06, 2021
See Experts for this Destination?
Share This Blog